Lady and the Tramp, Anyone? 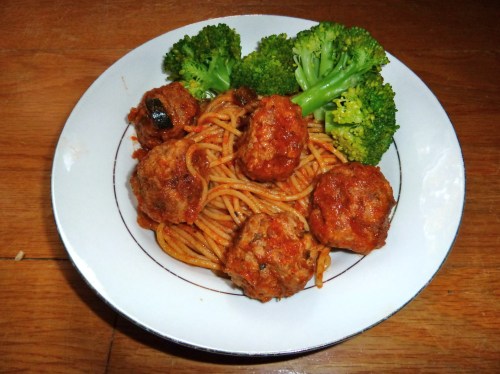 I love Disney. Even with its subliminal messages and not so subliminal ones.

I love the simpleness of its romances. I cannot see spaghetti and meat balls without thinking of Lady and the Tramp. Of course, no real person, or dog, would slurp a strand of spaghetti without chewing through and breaking it. That makes the scene all more romantic. I like the film even though I honestly can’t remember anything else about it besides that scene, but I thought about it today while I thought, planned, and made dinner.

Okay, maybe not that simple. I did use whole wheat spaghetti and ground flax after all. I know, I can’t leave anything well enough alone. But regardless of all my efforts at health-isizing this dish, it retained its heartiness. A true comfort food through and through.

Don’t be afraid to get your hands dirty and dig into the meat with your fingers. This helps to distribute the spices without overworking the meat and produces the most tender meatballs. Be sure to give the meatballs a deep golden brown, this contributes greatly to flavour. 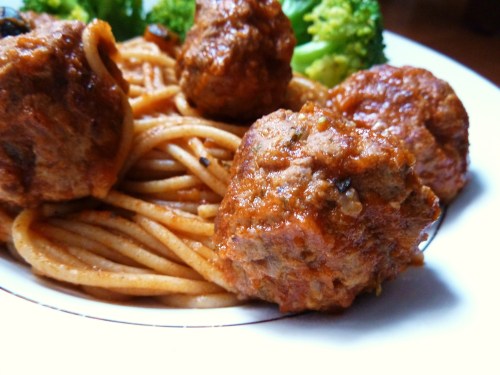 The ground flax is not really noticeable in the meatballs, but you’ll that it’s there to give your meal fibre and Omega 3 fatty acids. I also used prepared pasta sauce to speed up the process, and also because I didn’t have any tomatoes. Feel free to substitute your favorite recipe for tomato sauce. 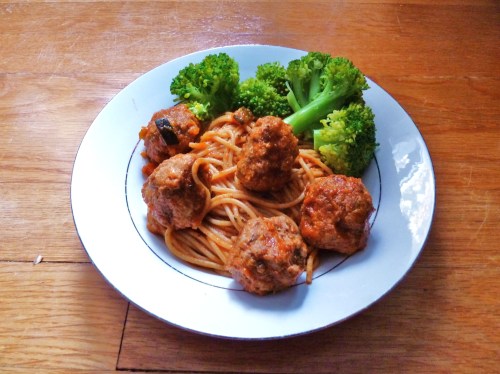 Today is my brother’s birthday. We ﻿celebrated on Sunday with his church friends and a much-loved soccer ball cake. My mom and I cooked a lot of food for dinner today. It was a feast, as I’m sure my stomach will happily tell you. Here are some pictures, enjoy! 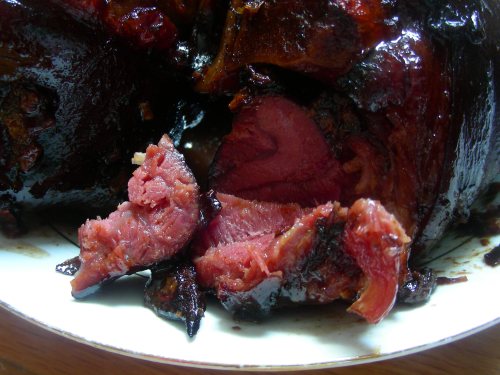 This is This is Braised Smoked Pork Shank. We purchased the pork shanks partially cooked and smoked, and braised it in soy sauce, sugar, garlic, ginger, and green onions. The soy sauce is probably why it turned out so dark, but looks notwithstanding, the meat was tender and wonderfully smoke infused. 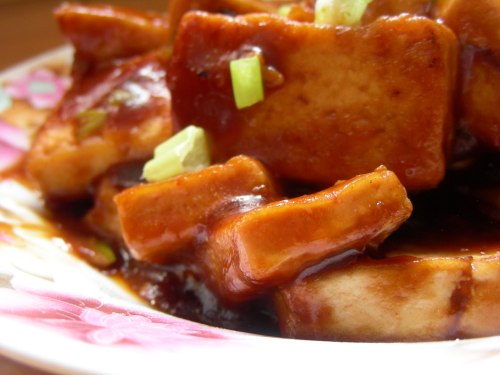 This is Tofu with Fish Sauce. The tofu is panfried until crisp and then briefly cooked in the sauce. The sauce has nothing to do with fish. It’s simply a version of a sweet and sour sauce with Sichuan peppercorns. 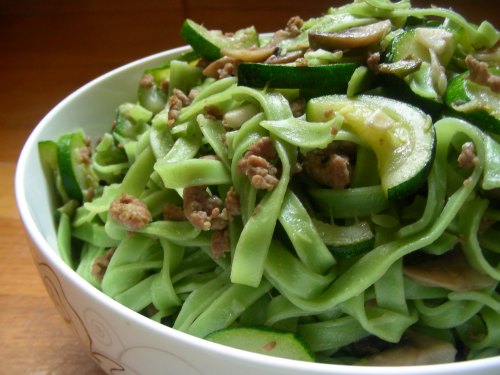 I’ve never seen vegetable Asian noodles before, but today at the supermarket Franklin requested them so we bought it. It’s flavoured with spinach and reminds me of spinach pasta. This is Stir-Fried Vegetable Noodles with ground pork, mushrooms, and zucchini. The Chinese traditionally eat noodles on birthdays because the noodle’s length symbolizes a long life.

Baby bok choy with dried salted shrimp. It’s refreshing to have a simple vegetable dish in a multi-course meal.

Chinese chives with squid. Both main ingredients are fresh-tasting and complement each other. The squid is tender;  the chives are vibrant. I realized that I may possibly like squid more than shrimp, perhaps because there is no shell to peel. Lazy me. 😉

The last dish is just peanuts roasted in the wok. This dish usually accompanies potent Chinese liquor such as Maotai. We didn’t drink with our dinner but included this dish because mom wanted to make eight dishes. Eight is an auspicious number in the chinese language because when pronounced, the word sounds somewhat like the word “to become rich.” So it wouldn’t do to have only seven dishes. Gotta have eight for my brother. The peanuts are wonderfully salty and nutty because of the low heat and long toasting time. Use high heat the peanuts will be burned. My mom rushed making this dish because we all wanted to start eating already.

What do you say? Isn’t Franklin a lucky boy? 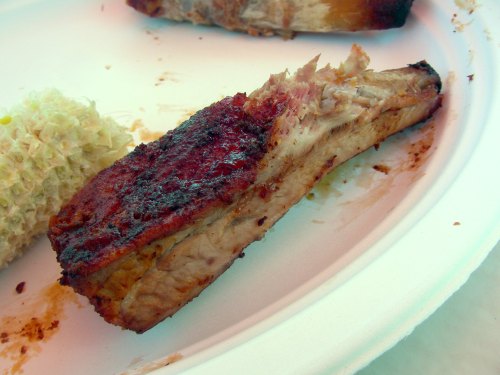 Alas, we have come to the end of July, which means the conclusion of my National Blog Posting Month. I have posted every day for the past month, and I have enjoyed sharing both food stuffs and life stuffs with you. Although there were a couple days when I wasn’t feeling well and wouldn’t have blogged, if not for my commitmend, I stuck it through, and I’m glad I did.

For this last post, I have no real food stuffs because, unfortunately, I’ve been out all day, to a company-sponsored BBQ lunch. Ribs was the main idea. Accompanied by the traditional potato salad, coleslaw, Boston baked beans, and a myriad of other sides. The meat was juicy but could have been cooked a tad longer, for more smokey goodness. I had strawberry shortcake for dessert, and make-your-own ice cream sundae for post-dessert.

Sadly, no other pictures of food since I have both an old camera and old batteries, which means the battery life is about 30 pictures. They are happily getting replaced soon.

I’m currently baking my brother a birthday cake. It will be in the shape of a soccer ball. Wish me luck! 🙂

Chicken Stir-Fry with Broccoli and Carrots

Here is a fairly classic stir-fry combination, at least around my house. You get kind of a tri-colour effect, green-orange-white, which is very eye appealing. The key here is to marinate the chicken briefly with cornstarch added to incorporate flavour and to promote tenderness. If you just slice and fry, the chicken breast will dry out. 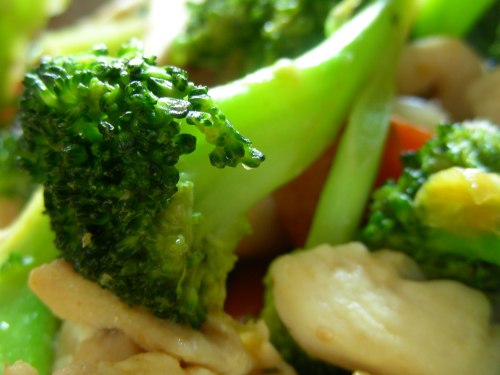 Another very important thing is to fry the chicken first, then the vegetables, then add the chicken back to the wok. This prevents the chicken from becoming overcooked. 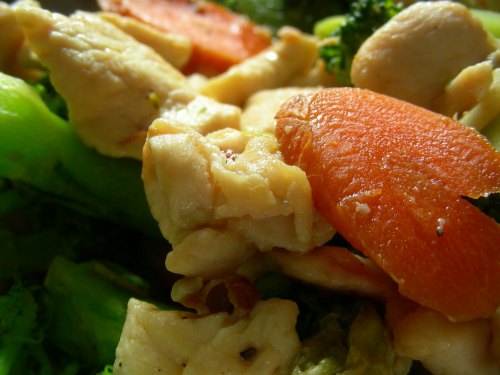 I used about one tablespoon of a Korean sweet chili sauce. It’s not enough to get a discernible increase in the heat of the dish, but it does give an anonymous sweetness and very very subtle kick to the dish. Feel free to leave it out if you don’t have the ingredient. 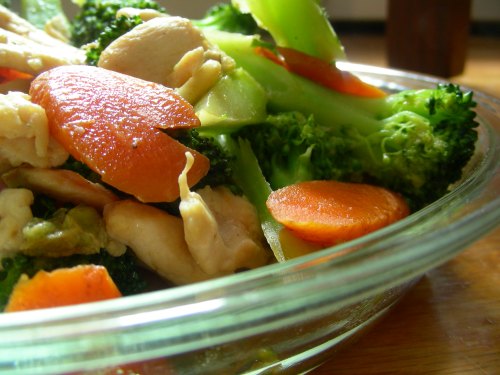 Chicken Stir-Fry with Broccoli and Carrots
serves 4 as a main dish, 6 as part of a multi-course meal

Penne with Sausage and Tomato Sauce

We had this for lunch yesterday. It was very easy, relatively quick, and pretty darn tasty. Italian sausage is simmered with crushed tomatoes with basil, onion, and a bit of butter. Then tossed with whole wheat penne. Good stuff. 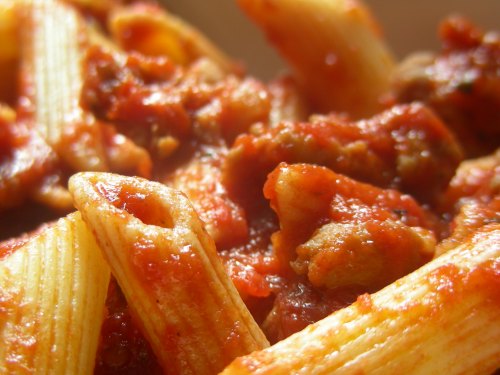 One thing about tomato sauces. I used to be a super herby kind of girl. I tossed herbs of every kind into my tomato sauces. Of course everything do not always taste good together. That saying something along the lines of “if you use a lot of good tasting ingredients, you can’t end up with something other than good tasting food,” unfortunately, isn’t always true.

Since then I’ve abandoned the herbs approach when it comes to tomato sauces. I became more of a purist. I tried the three-ingredient tomato sauce from Marcela Hazan’s Essentials of Italian Cooking. I became a believer. That simple sauce is unbelievably good for something that takes next to zero effort to put together. Heck, my kitchen un-savvy boyfriend can make it. All it takes is butter, onion, and tomatoes! You don’t even need to chop the onion! Seriously, if you’ve never tried it, you simply have to.

Half a stick of unsalted butter.

Don’t chop anything. Don’t brown anything. Toss everything in a large sauce pan. Simmer for about half an hour, or until the tomatoes break down and your kitchen smells heavenly. I eat the sauce with spoon. And the onion with my fingers.

This recipe is inspired from that. With a couple of changes.

Penne with Sausage and Tomato Sauce
serves about 4 for lunch

1/2 28 oz. can of crushed tomatoes with basil (don’t worry about the basil part, use plain crushed tomatoes if you like)
2 Italian sausages (I used sweet, but use hot if you like the heat)
1 Tbsp. butter, unsalted
1/4 medium onion
salt and pepper to taste
8 oz. whole wheat penne, cooked al dente

Remove the sausages from their casings. Heat a medium saucepan on medium high heat. Brown the sausage, breaking them up into small pieces. Do this until the meat is no longer pink. Drain the pan. Add the onion, unchopped, the butter, and the half can of tomatoes. Reduce heat, cover and simmer for half an hour. Stir and check every 10 minutes or so.

Toss the pasta into the sauces, season to taste. Serve with a tossed salad and some good bread.